I hope you are doing well! Today I want to share a new #ChallengeACraftyFriend card with you. This time the challenge was: Case an old card into the current style! So I chose  one of the first projects I ever made: a Swing Shadow Box using the adorable “Wish Upon a Star” by Mama Elephant. In some ways my card making definitely changed over the course of a year. I did learn a lot! But this card I actually still really liked. So I switched to coloring with copics – back then I used Zigs! I used a super fun Shadow Box Die and just recreated it how I would now. Didn’t turn out that much different but with those adorable bunnies you really can’t go wrong anyways! 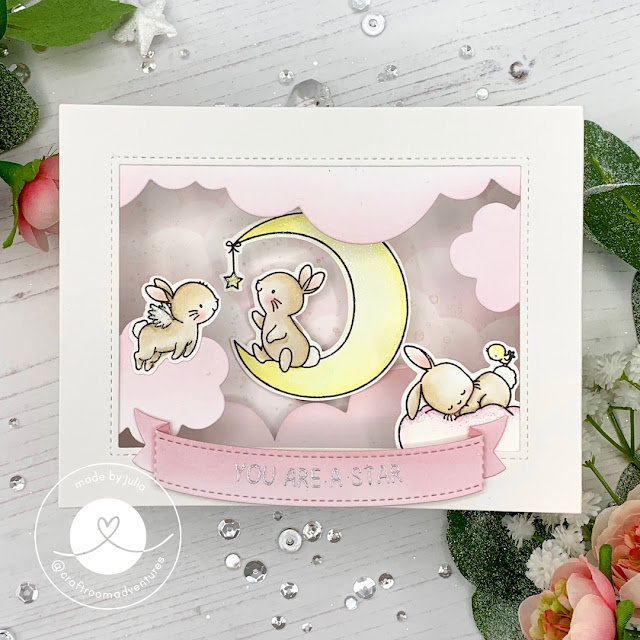 First, I stamped all my images onto Neenah cardstock and colored all of them using Copic markers. Then, they were cut out using the Brother Scan’n’Cut. Since I knew I was making a shadow box card I went ahead and added lots of shimmer pen and some Unicorn Stickles to my Images, since I always find it’s hard to add it at the end with interactive cards!

I die cut the Display a Card twice out of white cardstock and I also die cut two cloud borders and lots of Puffy Clouds (from both the Display a card and the Puffy Clouds die sets). I ink blended a background using a cloud stencil and Victorian Velvet Distress Oxide Ink and I used the same ink to add some shading to the clouds! I added some Liquid Stardust Splatters to the background. Then I also die cut the 3D Arch Banner and ink blended it with Victorian Velvet as well. 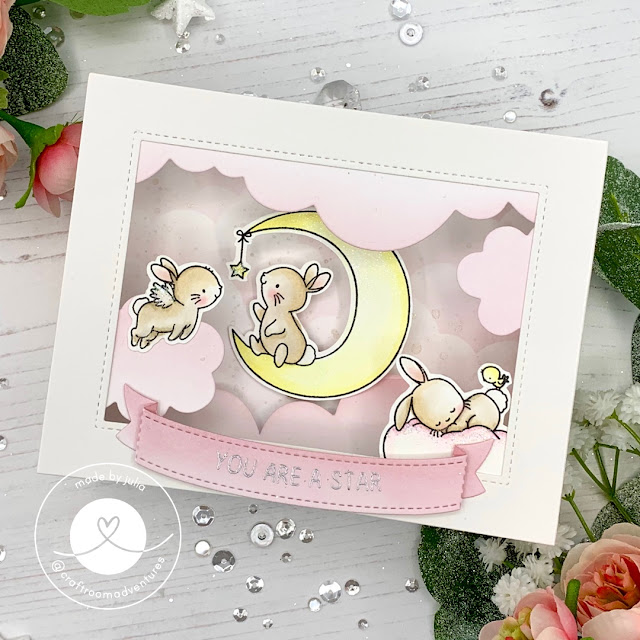 I stamped my sentiment from the “Shall we Dance” stamp set onto the banner and heat embossed it in silver.

Then it was time to create my swing mechanism. I adhered the cloud panel to the back of the front for my shadow box. Then, I used a “Spin and Slide Disc” from MFT and added it to the back of the cloud panel. I cut down a strip of thick acetate and used a hole punch to create the opening to go around the dis and added it to the back of the clouds as well. After that, I also die cut a tiny circle and adhered it to the other side of the disc to close the mechanism. Then I added some tape to the bottom of the acetate strip and used that to adhere my moon. This finished the mechanism. I also adhered a penny to the back of my moon to add some weight. Now all that was left to do was close up the card and add the rest of my images and die cuts. I assembled the shadow box with the hill (see video for a detailed look!) and added some cloud die cuts and the other images using liquid glue. 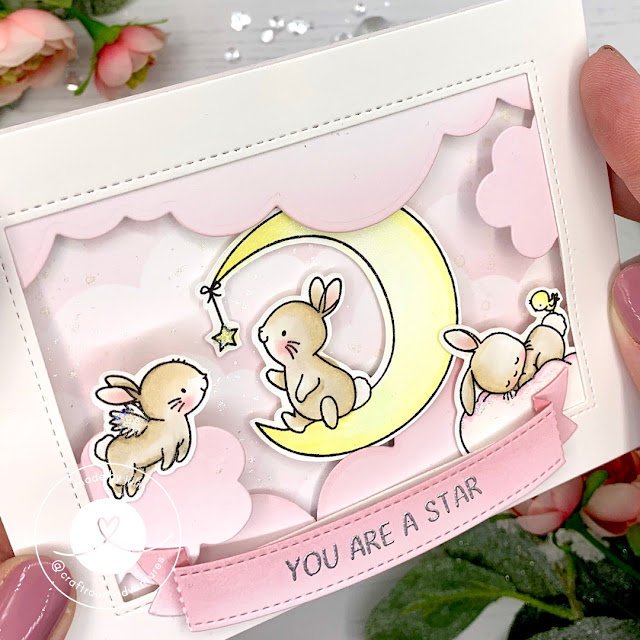 Finally I added the sentiment banner to finish off my swing shadow box card!

I really hope you like it! I really had lots of fun making it!

Thank you for stopping by and have a great day!

Mama Elephant – Wish Upon A Star

Mama Elephant – Shall We Dance (Sentiment)

Copic Markers – Colors can be seen in the video

Welcome to my little corner of the internet - I am so happy you are here! My name is Julia and I am a German craft enthusiast. I love sharing my crafts in YouTube video tutorials, on Instagram, Facebook, or on this fun little blog. So please feel free to browse and leave me a comment - I would love to hear from you!

Happy Friday! I am so excited to share this fun Ea

We use cookies on our website to give you the most relevant experience by remembering your preferences and repeat visits. By clicking “Accept All”, you consent to the use of ALL the cookies. However, you may visit "Cookie Settings" to provide a controlled consent.
Cookie SettingsAccept All
Manage consent

This website uses cookies to improve your experience while you navigate through the website. Out of these, the cookies that are categorized as necessary are stored on your browser as they are essential for the working of basic functionalities of the website. We also use third-party cookies that help us analyze and understand how you use this website. These cookies will be stored in your browser only with your consent. You also have the option to opt-out of these cookies. But opting out of some of these cookies may affect your browsing experience.
Necessary Always Enabled
Necessary cookies are absolutely essential for the website to function properly. These cookies ensure basic functionalities and security features of the website, anonymously.
Functional
Functional cookies help to perform certain functionalities like sharing the content of the website on social media platforms, collect feedbacks, and other third-party features.
Performance
Performance cookies are used to understand and analyze the key performance indexes of the website which helps in delivering a better user experience for the visitors.
Analytics
Analytical cookies are used to understand how visitors interact with the website. These cookies help provide information on metrics the number of visitors, bounce rate, traffic source, etc.
Advertisement
Advertisement cookies are used to provide visitors with relevant ads and marketing campaigns. These cookies track visitors across websites and collect information to provide customized ads.
Others
Other uncategorized cookies are those that are being analyzed and have not been classified into a category as yet.
SAVE & ACCEPT